With God on the Dog Team Trail 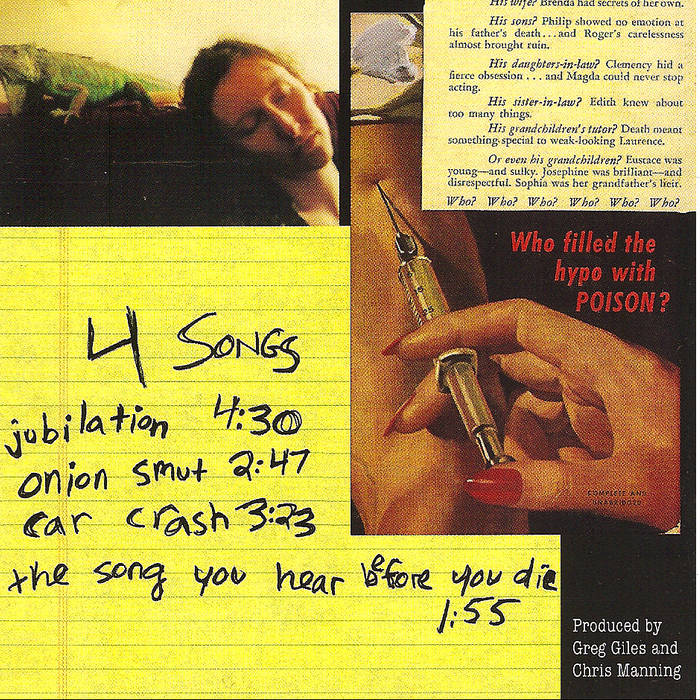 This is the CD that jump-started 20ML. I culled together a group of musicians, most of whom are no longer in the band (the exception being Kelly Atkins), arranged and wrote the songs, songs that in some cases dated back several years. "Jubilation" in particular had already been recorded on 8-track cassette; just a normal cassette tape, but the "master" records on both sides of the cassette. If you play side B of the master, you hear all the tracks backwards. Maybe one day I'll dump that recording on this site; many of those tunes, circa 1995, have never been heard from since. Anyhow, for this four-song CD, I designed the artwork, giving each song title an image of its own. I think Nils thought this was the cover art of the CD, but it's actually an interior panel of the insert. He must have had it folded incorrectly in his jewel case. What a dingus! Chris Manning, who is credited with me as co-producer in the lower right corner, continued as our engineer/producer for the first and second 20ML albums. He played bass in the SF bubblegum pop band from the early '90s, Jellyfish. His brother Roger Manning was co-founder of that band, and Roger went on to be the keyboard session musician par excellence in Los Angeles, playing all the keys/synths on several Beck albums, including Odelay, Mutations, et al. He might still be working with Beck; I've lost track. Chris still records bands in the Bay Area, including Minipop. Chris also helped me record the 8-track recordings in the mid-'90s. Chris was a huge help to me all through the beginning, bless his chin-scratching, thoughtful soul. Alex Kamages, a joyful distracted half-AfricanAmerican-half-Greek drummer, was driving his truck one day in the fast lane of 101 North when a section of galvanized steel pipe flashed across the hood and shot through the windscreen. He just had time enough to duck his head in the nanosecond after he noticed something flying towards him. The section of pipe flew across the top of his steering wheel, hit the rear frame of the driver's side window--denting it back a few inches with the impact--and bounced into the leg space of the front passenger seat. The hole in the windshield was a perfect circle that equalled the diameter of the pipe; in other words, it entered the truck cab like a spear. If Alex hadn't ducked his head, he would have been killed instantly. When he called me after the incident, I drove to meet him and his kinky curly Afro was still frosted with windscreen glass. I'm very happy he is still alive, because he is a sweet man and a gifted drummer.
-gg

I still wish "With God on the Dog Team Trail" was the name of our band. Sigh... That's what happens when you make decisions by committee.
-gg

This was a four song EP that Greg recorded prior to forming 20 Minute Loop. Came out in 1997.
-ne